Gold was able to extend its gains from the previous week and climbed significantly on Monday. Th...

Gold Weekly Forecast: XAU/USD is still vulnerable to US rates as attention turns to CPI

Gold was able to extend its gains from the previous week and climbed significantly on Monday. The breach over $1,700 drew technical buyers on Tuesday, and by midweek, XAU/USD had reached its highest level since September 12 at $1,730.

However, further dollar strength prior to the weekend prompted the pair to reverse a significant chunk of its weekly gains.

The US inflation report for September might spark a big market reaction and help determine the precious metal's next move.

What occured a week ago?

Beginning of the week, the improved market sentiment made it harder for the dollar to find buyers, and gold gained traction.

In the meanwhile, the decision by the British government to reverse the proposed repeal of the 45% tax on top earnings caused another leg down in global bond yields.

With the benchmark 10-year US Treasury bond yield plummeting almost 5% on Monday, XAU/USD had its largest one-day gain since March, rising more than 2%.

During American trade hours, ISM data revealed that pricing pressures in the manufacturing sector continued to diminish in September, while employment dropped.

Risk flows continued to dominate the financial markets on Tuesday, as the dollar decline gained momentum.

Notably, the rise in global stocks was driven by the Reserve Bank of Australia's (RBA) decision to raise its policy rate by merely 25 basis points during the Asian session.

Reflecting the influence of the RBA's dovish rate rise on the market's pricing of the Fed's rate outlook, the chance of a 75 bps Fed rate hike in November decreased to 50% in the CME Group FedWatch Tool.

After gaining about 4% in the first two trading days of the fourth quarter, gold entered a consolidation phase and saw slight losses towards the middle of the week.

Contrary to market expectations, private sector employment in the United States increased by 208,000 in September, according to the ADP. In addition, the ISM Services PMI survey found that input inflation in the service sector continued to climb at a robust rate.

During European trading hours on Thursday, markets were reasonably calm, and gold traded in a narrow zone around $1,720.

Fed officials' hawkish statements in the second part of the trading day aided the 10-year US Treasury note yield's ascent and kept the yellow metal in the rearview mirror.

Atlanta Fed President Raphael Bostic stated that the Fed's fight against inflation is likely still in its infancy, while San Francisco Fed President Mary Daly reaffirmed that they will hike rates into restrictive territory and maintain them there for some time.

Finally, Minneapolis Fed President Neel Kashkari cautioned investors that a stop in policy tightening was "quite a distance away."

The US Bureau of Labor Statistics revealed on Friday that Nonfarm Payrolls increased by 263,000 in September, above the market estimate of 250,000, while the Unemployment Rate fell from 3.7% in August to 3.5% in September.

Gold returned to the $1,700 range ahead of the weekend as a result of the 10-year US T-rise bond's toward 4%, which was fueled by a positive employment report.

The United States will not provide any significant statistics early next week. Wednesday, the FOMC will issue the minutes from its September meeting.

Regarding the Fed's policy outlook, this report is unlikely to include any substantial shocks at this time. The hawkish dot plot reiterated policymakers' plan to raise the policy rate above 4.5 percent and maintain it at that level for the upcoming year.

In the event that the announcement reveals that rate-setters are more worried about the growth prospects than September's policy statement led the markets to assume, the dollar might lose its appeal and pave the way for gold to advance further.

Before Thursday's inflation announcement, the market reaction is expected to be brief. In September, the Consumer Price Index (CPI) is expected to increase to 8.5% from 8.3% in August.

It is anticipated that the annual Core CPI, which excludes volatile food and energy costs, would increase from 6.5% to 6.5%.

Investors will likely place a greater emphasis on the core statistic, and a reading above 6.5% might spark another surge up in rates.

However, the Fed has made it plain that they would not overreact to a single inflation number, and the first market reaction may subside unless it significantly affects the market pricing of the subsequent Feed action.

The US Census Bureau will release September Retail Sales figures. Ahead of the weekend, market investors will keenly monitor the October Consumer Sentiment Survey from the University of Michigan, specifically the 5-year Consumer Inflation Expectation component, which fell to 2.7% in September from 2.9% in August.

A further decrease in these data might put selling pressure on the USD and vice versa. 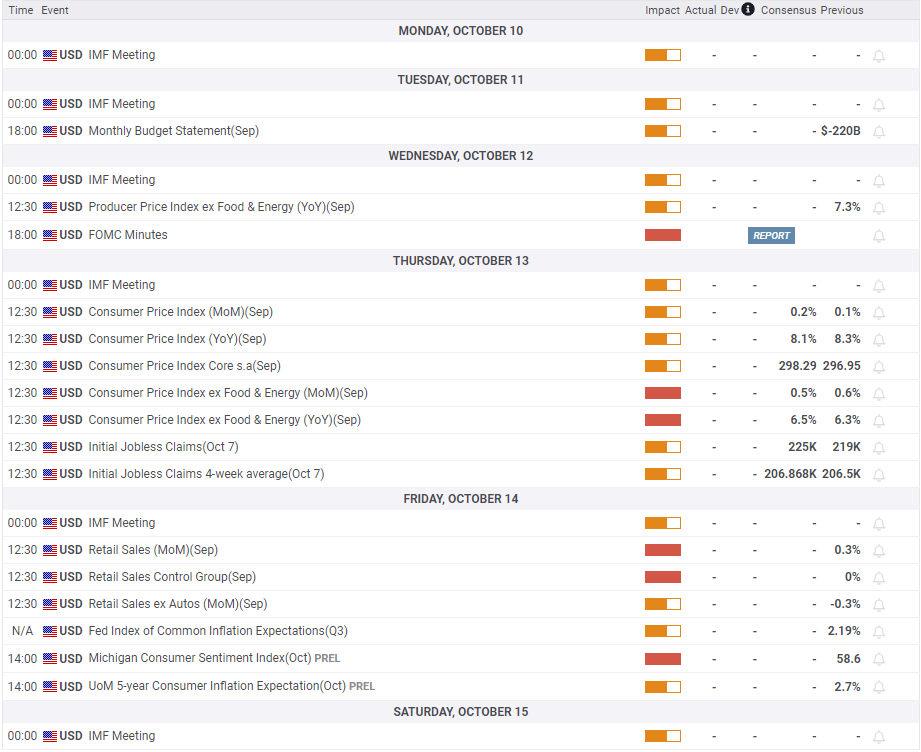 At the conclusion of the week, the Relative Strength Index (RSI) signal on the daily chart dropped below 50, indicating that gold has lost its bullish momentum and became neutral in the near term.

If gold goes below this level and begins to use it as resistance, the price might extend its decline below $1,665 (Fibonacci 23.6% retracement).

Despite the dip observed in the second part of the week, the FXStreet Forecast Poll indicates that experts anticipate gold to stay positive in the foreseeable future, with a weekly average goal of $1,710. Likewise, the one-month prognosis indicates a positive bias. 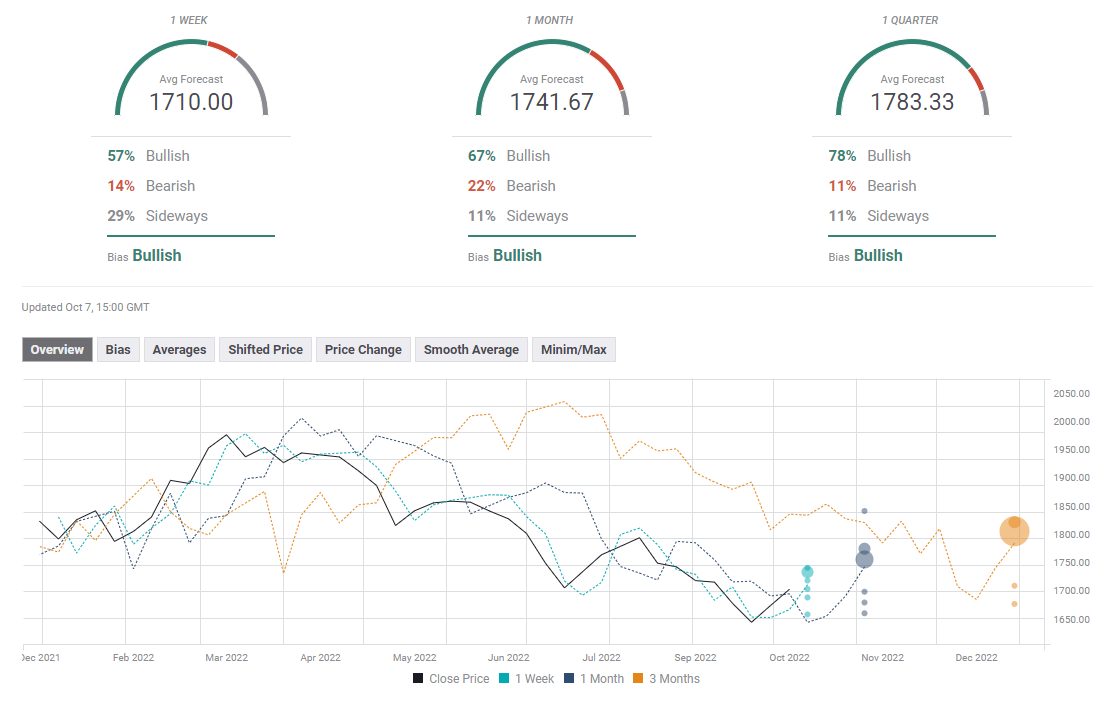